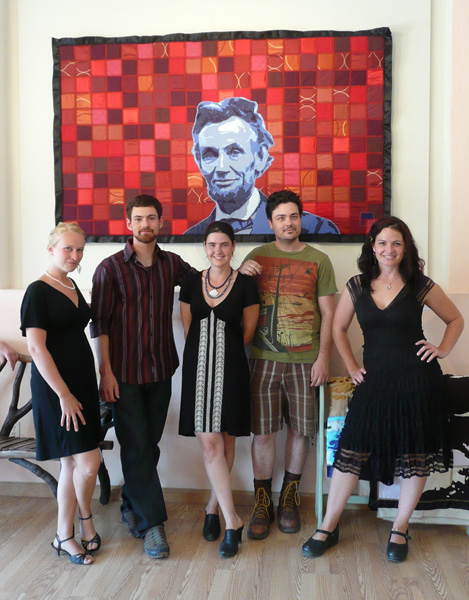 After arriving at Connie Rohde’s C Contemporary Art Gallery in Los Alamos, CA, I was surprised to meet the artist of the quilts and discover not a savvy middle aged Southern woman, but a very young man seemingly in the prime of his career. Having grown up in the South and studied art and architecture at Cooper Union, Haynes began experimenting with quilting and has developed a very unique repertoire of colorful fabric mosaics that enliven subjects from the icons of this latest show, American Nostalgia,  to those closer to the artist. More of Haynes’ work is displayed on his website. The images in this show were chosen in an unusual manner: through the tallied results of a questionnaire collected from 700 people on what icon they felt represented America. The results were extremely varied, and consensus was reached in groups of less than a dozen in most cases and from only 200 answers sharing commonalities, suggesting Americans draw a sense of national identity from a multitudinous bank of ideas and concepts. Pie and Flag were the two most common ideas identified in the survey results and thus were combined in this piece. No wine and cheese at this opening! American nostalgic food items only: soda, beer, hot dogs, and apple pie! Detail of President Lincoln. The photo this was based on was chosen for its ability to convey the humble and quiet nature of this nation’s 16th president.