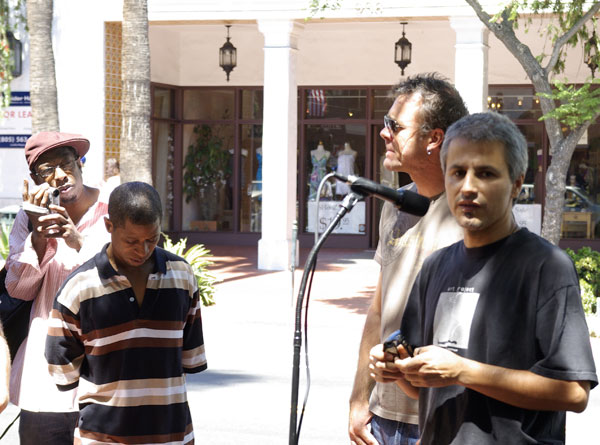 I followed the reception for the State of the Art Gallery 2008 Exhibition, taking photos for those who couldn’t make it. This is a fun juried event that brings new sculptures to State Street. This year’s theme is recycling and consumerism, appropriate and controversial given how gentrified State Street has become in the last few years. I’ll have to update this later to include all the artists. I arrived a little late. 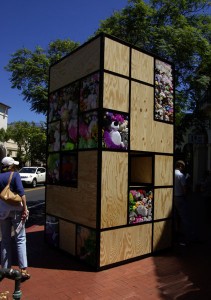 This is a piece by Rafael Perea de la Cabada and Matthew Woodford. 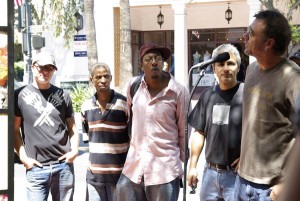 Matt speaking about the piece with Rafael and the crew that helped them construct it. 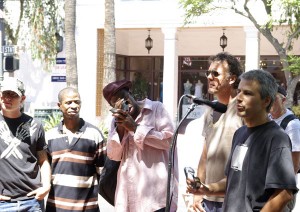 Rafael talking about the process of making the sculpture and it’s context in Santa Barbara. “Viewers can look but are not able to touch the cuddly and colorful plush contents…The sculpture incorporates open space on all four vertical sides, drawing the observer into the maze of consumerism. Persistence of the Unnecessary mirrors the store windows surrounding it and has fun with the associations. ” (From the press release.) 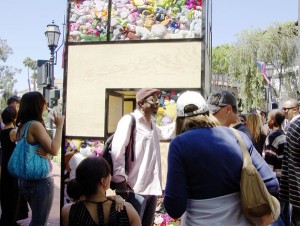 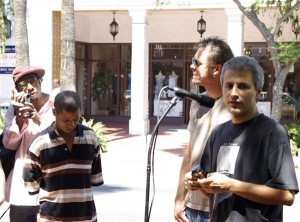 Rafael speaking about the piece. 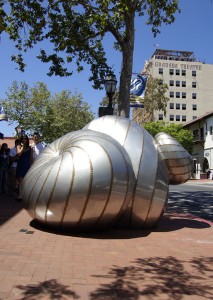 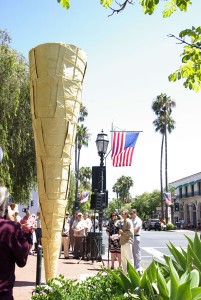 Richard Aber’s sculpture called Stupa, refers to the Buddhist structures erected at sacred sites and is made from coated canvas. 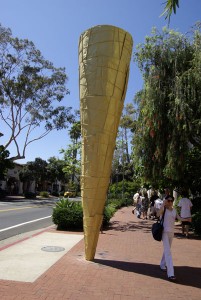 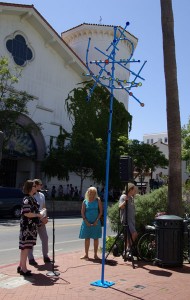 Helle Scharling-Todd’s sculpture called “Molecules,” plays with the boundary between art and science. 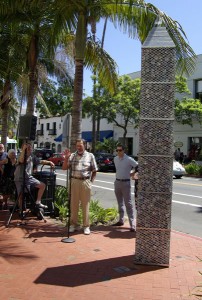 Jeff Sanders’ sculpture, a “steel and aluminum obelisk, is reminiscent of not just the Washington monument, but more ominously, a watch tower. The Latin title Annuit Coeptis, (which translates to “He approves our undertakings), is taken from the Great Seal on the reverse side of the one-dollar bill. ” (From the press statement.) 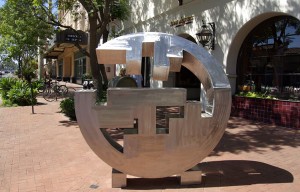 Nathan Snyder’s “Our World Breaking Open.” “The open shapes in the sculpture appear like a digital code, with missing units and the structural mass coming apart. ” (From the Press Statement.) 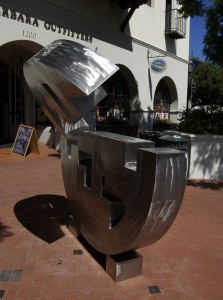 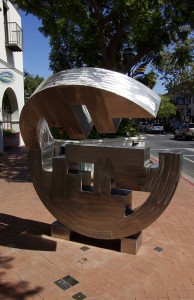 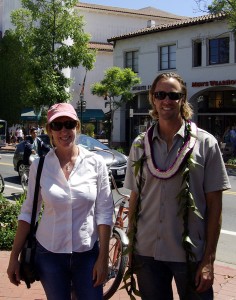 Martha with Nathan Snyder. Unfortunately, Ed Inks’s sculpture, a bronze urn, The Birth of Bacchus, was damaged and removed because of vandalism before the reception. It’s really a shame. His piece “brings to mind the relics of antiquity while being, paradoxically, a form composed of contemporary fabricated materials with a modern means of metal working and welding.” (From the press release.) And if you missed the reception, on October 2nd, the 1st Thursday of the month, 5 to 7pm, the general public is invited to walk State Street and meet and greet each sculptor.