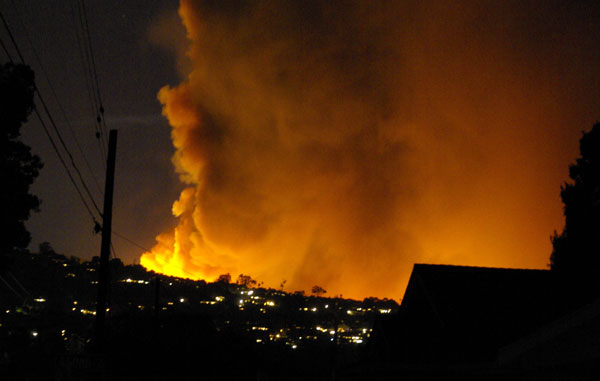 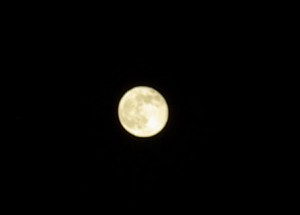 I was out photographing the full moon that came out around 5 pm, and an hour later we heard about the fire that by 7 pm, had me packing. I took a few more photos having my camera out, (I couldn’t resist, as horrifying as it is!) We’re okay, packing as I write to head north to Santa Ynez. Here’s is the fire over the foothills, a view from the curb of my apartment on Sola Street and Laguna Street. It looks like my apartment is still two whole blocks from the evacuation warning zone, so we’re safe for now. I’m still ready to take off if I learn that the zone expands, as it very likely will during the night. That’s the moon behind the smoke. As you can see, the fire knocked out the power on the hill below it. The power came back on intermittently in various areas, as shown below. It’s unreal. I still can’t believe the wind might bring the fire toward the ocean and right through downtown Santa Barbara. Makes me wish I had less possessions and possibly renter’s insurance. And getting ready for an art show at the Artiste Winery in Santa Ynez December 6th, I’m not sure how to handle packing up all my art. I’m not even sure that I’m equipped to move it all. It makes the prospect of it all being sold to different homes even more appealing! The chance of it surviving the fires that plague California are much better if it’s not all in one location. I can hear sprinklers going off. Business as usual or fire retardant? I went out around 12 and the fire had spread along the hill crest to the east. This is a long exposure, which shows how lit up the streets were from the full moon directly overhead. In the next two pictures, you can see the trajectory of helicopters moving across the orange skies. It’s a bit fuzzy, but you can see the lights of many emergency vehicles in this shot.