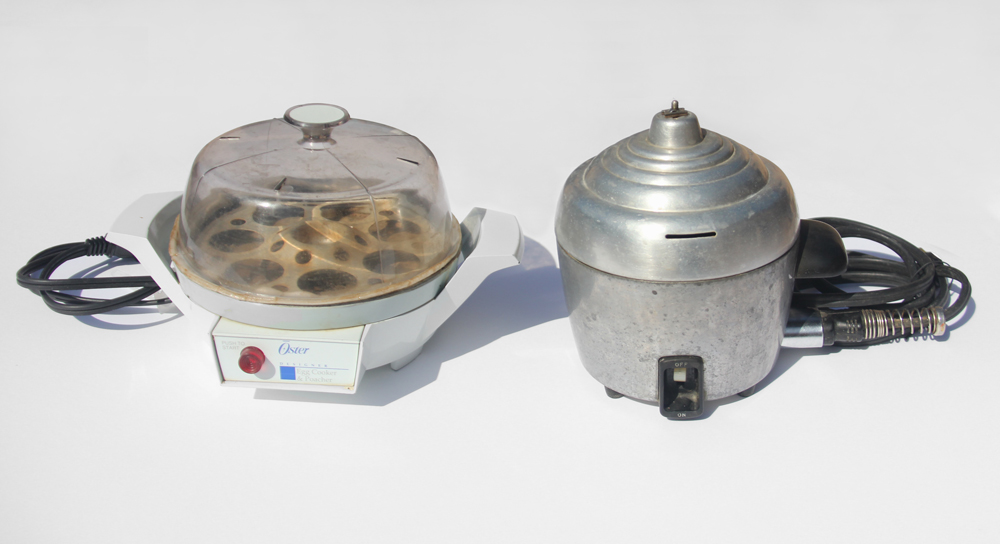 Tweet
Share
Share
Pin
Reddit
WhatsApp
It’s has been precisely a year since I last posted, and covering that span of time, four months of which were spent intermittently traveling and stationary in Europe, presents a daunting challenge. Before I touch on the highlights of my two trips to Europe last year, I’d like to delve into something which has struck me since returning: the decline of good and sensible design in production and manufacturing since the dawn of industrialization and mass production. I’m sure many have approached this subject, (and I’d love to hear suggestions of authors to read in the comments section below), but my main example lies with two similar products in regular use in my household: electric egg cookers! One is a compact stainless steel model from the 1950s, the other is a two year old Oster. While the former has been in use for over sixty years with very little degradation to its robust form, the latter I’ve deemed unsafe for use, as the plastic lid has begun to melt and bubble with every use. The very fact that this product exists exemplifies the escalating desirability of convenience in the American household since the early twentieth century. Initially, to replace the roll assigned to a basic lidded pot in the kitchen, the egg boiler had to be as durable and do the same job quicker and with less incidence of eggs cracking and messes made, or who would buy it? Now however, convenience is an ideology the vast majority of our population has already bought into, hook, line, and sinker, and the average buyer’s concern is primarily with price point, aesthetics, and immediate functionality, leaving durability and shelf life nearly entirely behind. This catches us up to the age in which the Oster cooker was conceived, with its extremities melting while it does the job it was designed to do, poorly. Looking at it, it’s clear to see that our obsession with low price and love affair with convenience has brought us to a calamitous place: we get products made from the cheapest possible materials, usually plastics, which initially look appealing, only to quickly break down and end up landfill fodder, if we’re lucky, or littering ocean and land, if not. Post-haste, these products must be replaced, and the cycle continues, with its tax on the environment and our bank accounts. Greenish crust of melted plastic— bad design or planned obsolescence? Is quality and durability characteristics that we’ll forever associate only with vintage products of the last century? Or will consumer tastes once again demand that only long-lasting materials be used to build the products that play roles in preparing the food we eat, washing the clothes we wear, and heating the water that we bath in? Only time and our collective discrimination in purchasing will tell.