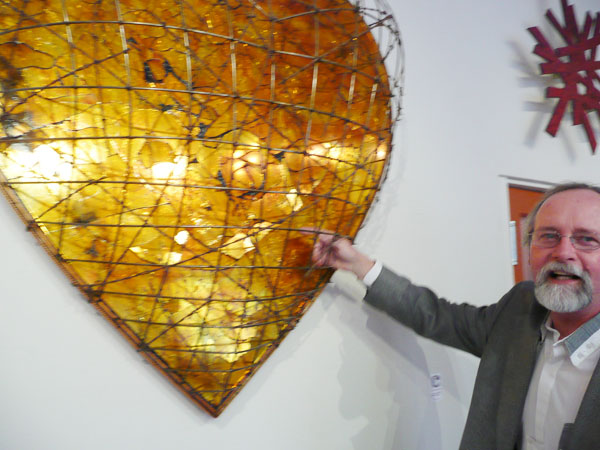 Tweet
Share
Share
Pin
Reddit
WhatsApp
I recently popped into the C Gallery for a show opening of work by Guy Rocky Stroup. I first saw Stroup’s work in a group show at the same gallery. My introduction to his work was with an intense and personal piece called “Borrowed Time,” which I was glad to see again in his solo show. The piece, to the left on the photo below, is constructed with bottles of heart prescription medications Stroup had to take to stay alive over a trying period of years between heart bypass surgeries. It’s no wonder the heart figures largely in his recent work! 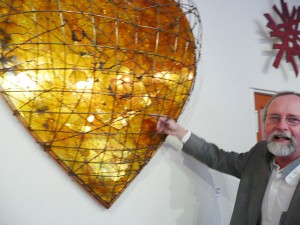 Stroup describing the process of making this piece from glass, tar, wire, and wood. Here you can just barely see what Stroup called a gift, a heart that formed in the cracks of glass while it was distressed by heat and other forces. Here, Stroup explained a bit about his piece, Mourning Glory. Pictured is a print, whereas, the actual piece was in acrylic, wood, and copper. In short, it was a response to the rippling effect of 9-11 throughout the US. There were also light-hearted pieces, (no pun intended!) that required wearing 3-D glasses for full effect. Connie Rohde, co-owner of C Gallery, helps guests at the opening view the painting as Stroup intended it to be seen. This painting also had a slight 3-D effect when viewed with the glasses. A photograph exhibited in the show. Stroup began as a sign maker, carving and illustrating redwood signs. He later attended Art Center College of Design in Pasadena, freelanced as an illustrator, and built props and sculptures for the film industry. “Fine art was always the goal,” Stroup claimed, “it’s just [taken] me thirty years to get there.” Stroup shows his abstract paintings and wall sculpture in Portland, Oregon, San Francisco, Los Angeles, San Diego, and in California’s Central Coast.