Tweet
Share
Share
Pin
Reddit
WhatsApp
Had I been easier on myself, I could have already accomplished a 10 or even 13 day painting challenge. But alas, I chose 20 days, and life intervened. In the interlude, I prepared for and performed in a Bo kata competition at the annual Shotokan Karate Championships in Camarillo this past Sunday. To my happy amazement, I won! I may post a video of it and my competition later, (when it’s edited together.) Rob shot photos and videos from the stands. Waiting for the event to get started

Sitting waiting to be called, next to one of my formidable competitors. It was quite exciting and nerve-racking! I had to look away, because I was certain the very sharp white belt above was going to cream me, a veteran brown belt. He was amazing. But at the end of his kata he stumbled with the Bo very briefly and was docked severely. [Update: He was actually the same rank as me, just a white belt at kobudo!] I went after two color belts and did quite well. A huge turn around from last year. First off, I got there on time, which for me, being time-management challenged, was a great feat. Second I was able to channel my nervousness into a very powerful aid. I imagined truly fighting off an attacker with a bow, going through the strikes I would use from the kata. This makes it much more real and focused, and timing and position become a lot easier. It also puts your adrenalin into the context of a fight, when you would naturally feel it. I also used my breath to settle my energy. This is very important—otherwise your energy and concentration scatter and can ruin your chance at a good performance, which is what happened to me the year before.  Sending out a quick prayer for help never hurt either. Whether you believe God, gods, or your own hairy subconscious mind is hearing and responding, there’s something to be said for the effects of prayer. I could hardly believe the rush of energy I had by the time I was in front of the judges! The closest thing I can think of is the feeling you get when you all-out sprint for a given distance after jogging and getting warmed up. That can be quite a high, but this was exalting! My body seemed to perform the kata on its own, and with more force than when I consciously practiced it. I can certainly continue to make improvements, and that within itself is exciting! I also have been preparing for my first public ballet performance this Friday night at 8 pm at the Santa Barbara City College. That should be interesting! My Arabic language final is also coming up, and early for me, because I want to see my sister’s graduation in Santa Fe. I won’t bore you with my work schedule, but suffice it to say I’m happy to have been able to sleep and get loads done these past few days. I have been sad not to have finished a painting, but will continue again as soon as I can. Here’s the drawing I did for a painting of Gurumayi Chidvilasananda, a wonderful spiritual teacher: 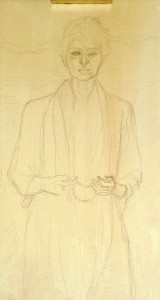 I spent quite a bit of time on the palette and have started the painting. Let the challenge continue!